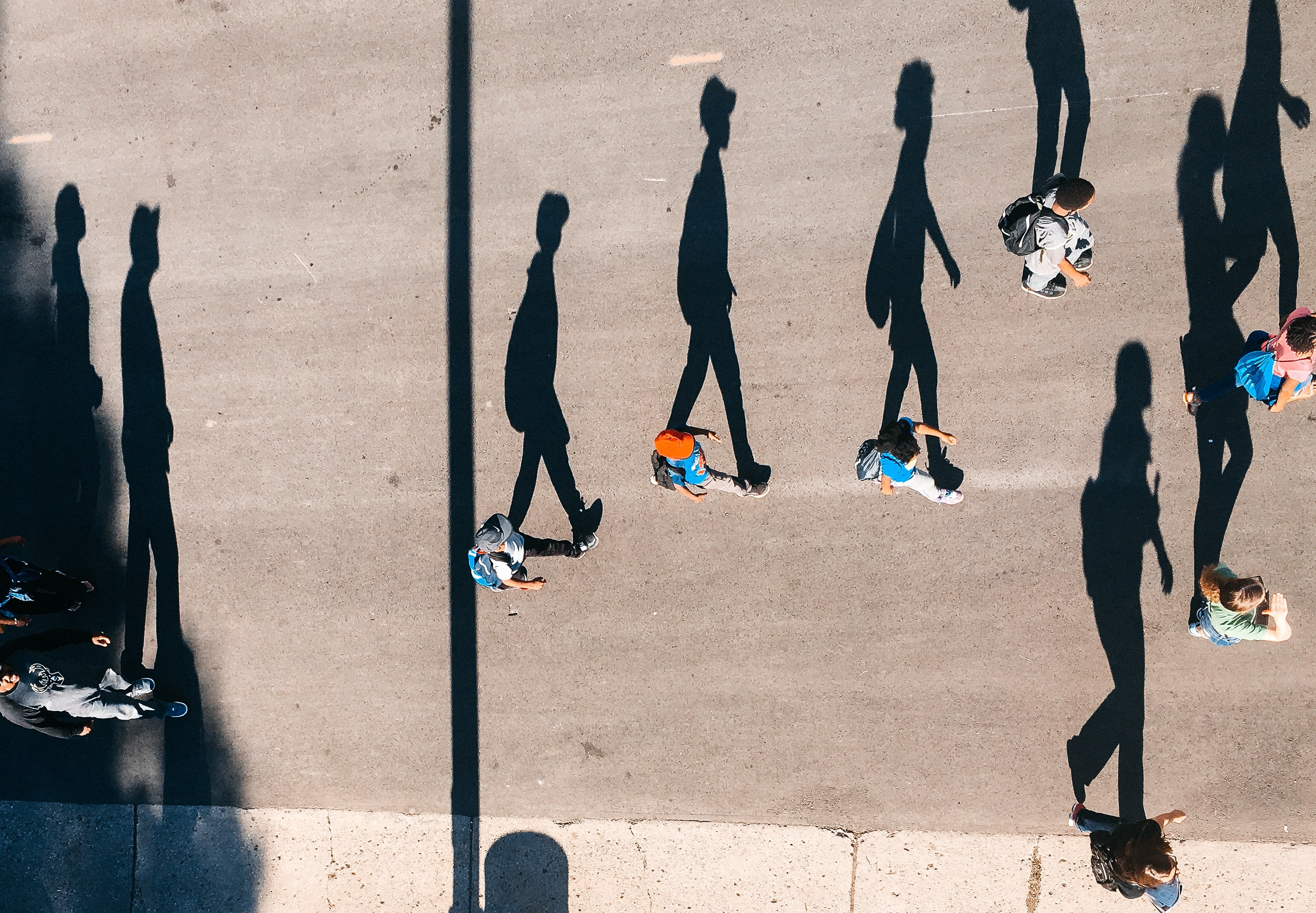 “Many of you — as I have been, as I am — are where you are in your life based upon what you believe. And it’s not just what you think you believe on the surface. It’s also your shadow beliefs that are holding you back from moving into the life you believe you deserve. If you’re not conscious of that, you end up acting out of that belief system.”  – Oprah Winfrey

Countless books, motivational Youtube videos, and Instagram quotes reveal the significance of self-belief. Some, even going beyond expressing its mere importance and provide steps to building it. The challenge post content consumption is knowing whether or not you actually believe in yourself. A status only reached when you've fully integrated your surface with your shadow-belief.

Belief often made to be binary — you either believe or you don’t — has its grey area. It's where your surface and shadow lack harmony, and unfortunately, where most people live their entire life.

Science says the closer an object is to the light source, the larger the shadow it casts. Similarly, the quotes, Youtube videos, and books act as light sources revealing my shadow, exposing me to myself. The more I learned, the closer I got to that light source, and the more my shadow expanded.

Sadly, learning was the easy part. The real work started when I took steps to integrate my shadow. To create harmony and determine what I believe about myself. Personally, like most people, I’ve existed in the grey space unknowingly. Then, this year, I finally decided to address my shadow. And in a recent interaction, I realized the level of progress I'd made.

In conversation, someone asked, “I want to get into copywriting. How did you break in?”

I responded, “First, I started calling myself a copywriter. Then, I began moving like a copywriter. I claimed it before I was it.”

A few days later, reflecting on the conversation and my remarks, it dawned on me the vast transformation I’d made mentally over the course of this year. Last year, I couldn't have made that same statement.

Dwelling on the conversation a bit more in search of the takeaway, when it finally hit me. The road to integration is one of action because faith without works is dead. I demonstrated my belief in my copywriting ability through my actions.

Some may call it fake it until you make it, but that only be the case if I claimed the Copywriter title without doing any work. Daily I practiced and strived to get better so that eventually my skillset fully matched my title.

In Corporate America, promotion comes post-performance. As a manager with aspirations of becoming a director, you must perform director tasks as a manager to showcase that you are capable of the director role. However, when it comes to our own life, if we are to become all we can be, we must do the exact opposite. Claim the title then do the work.

This year, on a journey towards self-belief, I've seen the speed at which I claim what "I am" increase. No longer am I seeking promotion from others, instead, promoting myself.

Leaving the security of my corporate job for the world of uncertainty as an entrepreneur was my boldest move yet. Greatly superseding my previous peek of studying abroad in Paris. To many, this very act demonstrated that I was daring, fearless, a true renegade.

However, despite being confident that I'd master the game of real estate wholesaling, below the surface, there was still some lack of self-belief within my spirit. Only rearing its ugly head when it was time to change my Linkedin Profile.

I struggled with switching my title from Regulatory Transformation Consultant to Real Estate Entrepreneur. At that moment, it became clear that speaking my entrepreneurship proclamation to myself was one thing, but declaring it publicly was another. Like a marriage, the public expression introduced an additional layer of accountability.

My resistance to publicly affirm my plans or goals was unusual, given my track record. I'm known for making public declarations. My senior year, reflecting on our college experience in conversation with a few friends. One said, "Nate, I remember when I met you freshmen year, and you said you were trying to make the Dean's List."

Not remembering the comment, I thought about the boldness of freshman year Nate, a kid from a public PG high school, to state his academic goals to his peers, despite knowing many of them came from a stronger educational background. At the moment, all I could do was smile.

In hindsight, sharing goals that I feel are within my control, regardless of the difficulty, is inside of my comfort zone. I knew making the Dean's list was 100% possible as long as I studied and put in the time.

Similarly, within a day or two of preparing for my AWS Certified Cloud Practitioner exam, I added "AWS Practitioner certification in Progress" to my LinkedIn profile. I spent no time dwelling on if I'd pass my exam or not. Knowing that as long as my energy matched my words, I'd pass.

However, in entrepreneurship, there are no guarantees, and that uncertainty made it uneasy, claiming the title of Real Estate Entrepreneur. Despite already closing my first wholesale deal. I tricked myself into believing that I needed to sell a certain amount of houses or reach an arbitrary metric, I'd yet to quantify, before I'd earn the right to claim the title of entrepreneur.

In the midst of my struggle with this issue, I came across ET's (Eric Thomas) Take Control Charlotte's speech, where he discussed the importance of "I am." In the speech, he also, along with the audience, recited some affirmations.

I am wealth, therefore, I will not search for what I already have inside of me/

I am wealth, therefore, I will not search for what I already have inside of me/

I am success, therefore, I won’t go looking for it/

I can, I will, I must break all barriers on my journey to wealth and success /

I can, I will, I must climb every mountain scale every wall /

I can let nothing, absolutely nothing, not even me stand in the way of my God-given destiny /

Talk about perfect timing; I began reciting it in the mirror and writing it down in my notebook every day for about seven months, committing it to memory. This gave me the confidence to change my title and kick-started my self-belief journey.

After months of 5 am mornings looking in the mirror as saying, "I am..." I finally saw the impact during my transition into copywriting. My timeline for claiming a new title drastically decreased.

I went from waiting a few months after closing a deal to call myself a real estate entrepreneur, down to a couple of weeks with no official copywriting experience to call myself a copywriter.

In July, despite having no experience, I actively applied for freelance gigs on Upwork bidding at the compensation level of an intermediate skilled Copywriter.

Then in August, I transitioned from online pitches to in person. I boldly attended DC Start-Up week and introduced myself as a copywriter. Finally, in September, I worked on my first official copywriting gigs.

You can't earn your insecurities away. Despite not yet making any money as a copywriter, my level of self-belief while speaking with potential clients at DC Start-Up week was higher than it was post-closing my first deal. Yes, the process of making money can build your confidence, but the money itself does not.

The Opinions of Others ≠Money

Towards the beginning of my entrepreneurial journey. My shadow leveraged my fear of other people's opinions to silence me. It led me to believe that I was a fraud not worthy of the title entrepreneur.

However, over time, as I began to silence the voices of the naysayers that only existed in my head, I realized that worrying about people's opinions doesn't put money in my pocket.

If anything, it takes money away because it may result in a missed opportunity. Also, much deeper than money, most people don't have the qualifications to provide a substantive critique, so why even consider or worry about their opinion.

Belief in Others ≠ Self Belief

I'm often amused by the ease at which I believe in others, all the while struggling with my own self-belief. It's easy to believe that my loved ones have what it takes to accomplish their goals and dreams; it's hard to believe that I'm equipped with the skills to achieve my own.

The challenge for many, myself included, is recognizing the value I bring to the table. Currently, I’m working on getting to a point where I see myself at least as valuable as others see me — then finally getting to a place where I value myself more than anyone else does.