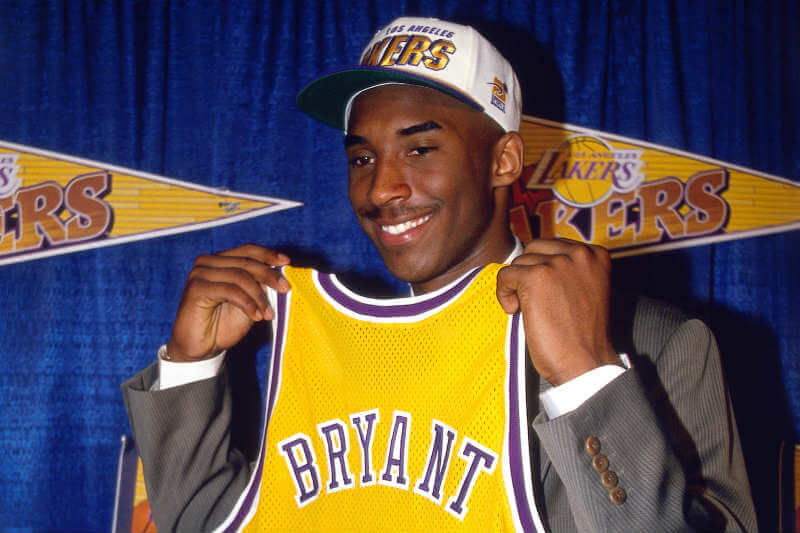 “Dear 17 year old self, When your Laker dream comes true tomorrow, you need to figure out a way to invest in the future of your family and friends. This sounds simple, and you may think it’s a no-brainer, but take some time to think on it further. I said INVEST. I did not say GIVE...” — Kobe

On NBA Draft Day, hundreds of young men realize their dream of becoming a professional basketball player. I imagine the feeling is a combination of joy, as their childhood dream is now a reality, but also relief, because all the hard work they’ve put in has finally paid off, literally.

I envision the chorus to 21 Savage’s - “Bank Account” playing subconsciously in each of their  minds, as they anxiously wait for their name to be announced, and called to the stage.

Until recently, I found it difficult to empathize with the plight of professional athletes that amass a great fortune over their career, and lose it all as a result of reckless spending on family and friends.

Case in point, Antoine Walker: he made over 110 million dollars during his NBA career and ultimately filed for bankruptcy just two years after leaving the NBA. How can one possibly squander all that money?

Upon hearing the story, I thought of countless examples of how I would have wisely spent and saved my imaginary 110 million, failing to realize however that I too had a draft day. Although it wasn’t televised and I did not get the million dollar payout, I too was realizing a dream and being rewarded for all my hardwork when I received my full time job offer.

Much like a professional athlete, after the red carpet rolls away i.e. the initial excitement from receiving and accepting an offer, the pressure of one’s reality sinks in. This reality includes the pressure to perform well in your profession and to take care of those around you.

Being a first generation college graduate and first generation American, I’ve grown accustomed to pressure. I’ve even learned to thrive with the cards I was dealt, however, the pressure to be a provider is a bit different. While I have not experienced the challenges of providing for a child, the challenges of meeting the everyday demands of your family can be quite difficult.

"Do you hustle for your first name or last name?" — Danny

In high school my pops said, “Nathan, Lindsey may be the oldest of the 25 grandchildren but you’re the oldest male and the leader of the family.” Appealing at first, this responsibility became less attractive over time.

And similar to many professional athletes, I stepped into this role unequipped. When I began my career, my sister was (still is) in medical school so I was the first of my siblings and extended family to have to navigate this “post-grad, first job” space.

“...Purely giving material things to your siblings and friends may appear to be the right decision. You love them, so it’s only right that they should share in your success….But the day will come when you realize that as much as you believed you were doing the right thing, you were actually holding them back…” — Kobe

One day my younger brother Josh texted me, “I’m running late for class, can you call me an Uber.” Being the amazing older brother that I am, I said, “yes.” A couple weeks later, I got the same text. Ok, I got you bro. And again…ok cool. On the fourth time I asked, “what about the bus?” He replied, “the bus won’t get me to class on time”... which I respond, “take an earlier bus.”

In that moment I realized ordering him another Uber would prevent him from being a responsible young adult which includes waking up earlier to take the bus or getting a job to pay for Uber’s.

“...You will come to understand that you were taking care of them because it made YOU feel good, it made YOU happy to see them smiling and without a care in the world — and that was extremely selfish of you...” — Kobe

We all dream of the day that we can afford to take care of our loved ones. I can only imagine how Kobe felt telling his parents that you can now live the life of your dreams. “Mama we made it!”

But when did this dream become a nightmare that tore his family apart? When did the people who were his original sources of motivation, and the reason for his success become the problem and not the solution? It became the latter when he began giving out of a desire to feel good about himself.

Regardless of if my brother knew it or not, it felt good to be able to order him an Uber. Growing up I remember seeing movies/tv shows of older brothers hooking up their younger brother and it inspired me. Even before I had a real job, I tried my best to do my part as an older brother like making sure he had nice kicks for back to school. So when I became gainfully employed it was only right that I did more. But, again, giving shouldn’t be about me.

You may be thinking Nathan you spent $50 on a few Uber’s, big deal. And you’re right, but it’s not about the money. I realized that a few Uber’s would only be the start because our desire to consume is never satisfied.

In early 2013 Kobe’s relationship with his parents turned sour after refusing to buy them a 4th house in Nevada.  His mom taking matters into her own hands, attempted to sell half a million dollars worth of his memorabilia, which included his championship rings, high school jerseys, and trophies, to an auctioning agency.

This example shows that our desire to consume never ceases. I imagine that in the beginning of Kobe’s career one home was just enough for his parents, but unfortunately because of years of enabling behavior, three homes was no longer sufficient.

“Before you sign that first contract, figure out the right budget for your parents — one that will allow them to live beautifully while also growing your business and setting people up for long-term success. That way, your children’s kids and their kids will be able to invest in their own futures when the time comes.” — Kobe

Initially, I thought being a provider meant giving and doing for others. But now I understand it requires much more than selfless giving.

As a child I never thought about my mom’s mortgage before asking for ice cream truck money. But, how do you tell your mom no when she gave you life and bought you ice cream?

Personally, to counter my reluctance to say no to family, I limit the capital I have on hand so I can’t meet every need. I made my long term savings an expense, my life insurance. I also invest any money I don’t need to survive.

As I mentioned earlier, our desire to consume is never satisfied. If you have excess funds in your account I can almost guarantee you that something or someone will find a way to take it from you. People have an infinite amount of wants/needs and it’s impossible to meet them all so don’t feel compelled to.

“As all the world's problems can’t be solved by one man neither can all one person’s wants/needs be met by one man.” — Nate Perro

So find ways to keep your long term savings out of your account and invest any money you don’t need to survive.

Based on my last point, you may be thinking I’m a Scrooge but that’s far from who I am. In fact, at the beginning of 2017, I decided that in addition to tithing I would give each of my 22 cousins a birthday gift... (if you are reading this and I missed you, I’m sorry 2018 I’m going to get everyone, I promise. lol)

Nonetheless, a few days after Christmas this past year my mom, upset, said I should have given all my cousins a Christmas gifts and that I was being greedy for not. In the moment I was frustrated, thinking will my efforts ever be enough? But after some time to cool off, I realized that only I know what generosity means to me.

Yes, maybe I could do birthday and Christmas gifts but the opportunity cost would force me to sacrifice the long-term for the short-term. I’m not here to say don’t give but don’t give to the extent that you paralyze your future and the future of those same people.

This too can be extremely difficult but remember; they may not understand the journey, but they will celebrate the victory. So define what generosity means to you in your current financial state and execute on it.

‍“It's not how much money you make, but how much money you keep, how hard it works for you, and how many generations you keep it for.” — Robert Kiyosaki Creating wealth is one thing, but maintaining it is another.  Statistics show that about 70% of wealthy families lose their fortune by the second generation and by the third generation, that number jumps to 90 percent.

It’s likely that the 2nd and 3rd generation were depending solely on the 1st generation for wealth accumulation and maintenance which is unsustainable. Michael Jordan, arguable the greatest basketball player understood this. After multiple champions rings he said “it’s not who is the greatest player, but who is the greatest team.” What Michael recognized was his greatness correlated with the overall greatness of his team, because a team is only as strong as its weakest player.

No person is an island! So regardless of the empire you aspire to build realize that it only takes one weak link to destroy it. So remember, invest in your loved ones and empower them with the tools they need to create their OWN future.