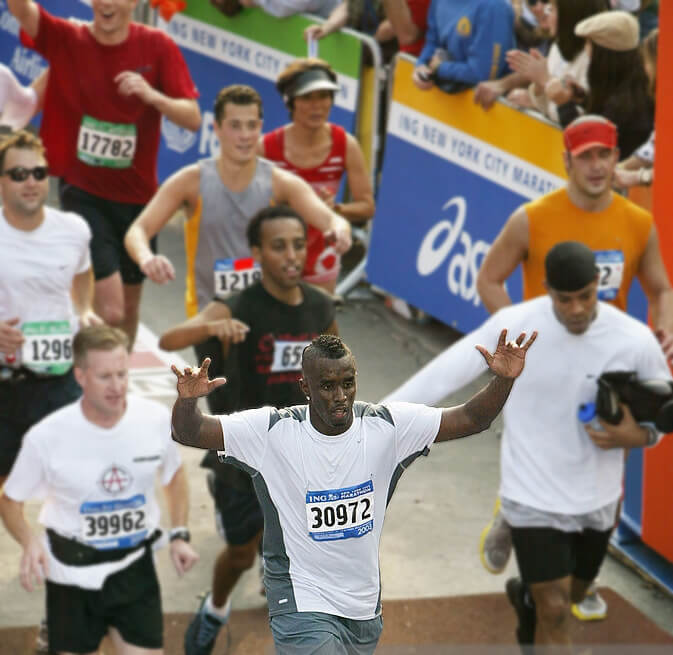 After stripping away the world class trainers and grade A dietitians, it should be no secret that the remaining “it factor” for success in sports is mental toughness. In fact, countless professional athletes in all sporting arenas have stated the game is 90% mental and 10% physical.

Although I’m no professional athlete, mental toughness plays a large role in conquering everyday life. As Edmond Mbiaka said, “The strength of your mind determines the quality of your life.”

A trend I’ve come to notice from studying the habits of individuals I admire is learning that running is apart of their daily routine. Hoping to emulate some of the tactics of these individuals, I knew that in spite of my sincere dislike for running, I would eventually have to start.

For years I chose to neglect this gem because I operated under the assumption that the only benefits to running were physical. Now that I’ve overcome my dislike, I understand that although running can strengthen your body, it can also strengthen your mind.

“The keys to life are running and reading. When you're running, there's a little person that talks to you and says, "Oh I'm tired. My lung's about to pop. I'm so hurt. There's no way I can possibly continue." You want to quit. If you learn how to defeat that person when you're running. You will know how to not quit when things get hard in your life.” - Will Smith

Last year on my 22nd birthday, I decided it was time to embark on my running journey. That morning, I woke up and set out for my old high school track with a goal of running 5 miles.

After mile 1 my commitment to 5 miles dwindled. My mind shifted from I’m running 5 miles to is it necessary to run 5 miles. I began to make excuses, “I mean, I have never run this much before so maybe I would be better off starting lower and working my way up.”

Caving into my feelings, I only ran 3 miles even though I still had some gas in my tank. My lack of mental toughness prevented me from focusing in on the goal and overlooking my feelings. So I quit, not to return for an entire year.

“When your brain says you’re done you are only 40% done.” - David Goggins

On my 23rd birthday, I chose to approach the run with a different mentality. I walked on the track promising myself that I would complete 5 miles, no matter if I had to crawl across the finish line. And through the pain, I finished all 5 miles, ultimately kick-starting my running journey.

Living in NYC, however, presented a fair challenge for the continuation of my new found running journey. There is very limited access to outdoor tracks, and I made a vow to myself years prior that I would never be one of “those people” running outside throughout the city, because more often than not they looked a hot mess! (in my humble opinion)

Nevertheless, feeling somewhat accomplished after my birthday run performance, I put my pride to the side one morning and went for a run in the city. It was great! I ran about 6 miles, and to my surprise my body felt a lot better than I anticipated. I soon began to notice an unusual trend with my running time via the Map my Run app:

If you look closely at my run times, you will notice that when I run outside, I run faster and longer compared to when I run on the track or treadmill. Initially it didn’t make sense; how can I average 8.56 minutes per mile over the course of 5.5 miles and run a 10 minute mile on the treadmill?

Reflecting on each run I recalled that when I ran on the track, I was constantly counting the laps, “ 3 more until it's 5 miles, 1 more until 5 miles.” Same on the treadmill,  0.6 miles, 0.8 miles. 0.95 miles. However, when I ran in the city my focus was solely on running not how long or far I had ran.

This experience led to a self discovery of what mental toughness really means. Is it having the discipline to not watch the clock or count the laps? No. Personally, what I’ve found to be at the core of mental toughness is the art of being present.

And no, I do not simply mean saying “YOLO” and being carefree. There is a huge misconception that being present is synonymous with neglect. In reality, being present meaning being in sync internally and externally.

Recently, I read The Alchemist by Paulo Coelho. A story in the book beautifully illustrates this concept of being in sync internally and externally. Wanting to know the secret to happiness, a boy went off in search of a wise man that lived in a distant palace who was said to have the keys to life.

After finding the wiseman and following his instructions the wise man finally told the boy that the secret to happiness is “...looking at all the wonders of the world and never forgetting the two drops of oil in the spoon”.

When the two are synergized we have harmony and when they are not an imbalance is created.

To simplify what this imbalance looks like is to imagine you are going on a road trip. The two essentials of a successful road trip is a car and a GPS. Going on a road-trip without a GPS represents an internal imbalance. You have the means to reach your destination but you have no direction.

Having a successful road trip without a GPS would be extremely difficult. It would result in a lot of wasted energy and time, and the chances of you making it to your destination are minimal. When you lack purpose it’s difficult to stay committed because you have not mapped out how you will get to your goal.

Now imagine having a GPS but no car for the road-trip. This represents not being in sync externally or having a purpose but not the means to achieve it. As you can imagine, you will only get but so far on a roadtrip with no car. If you dared to walk, eventually you would burn out.

We all either have personally or know of someone that burnt out on the road to fulfilling what they believe to be their life’s calling. Somewhere on the road that passion faded away and what was once enjoyed now seems like a chore. Marveling at the wonders of the world  helps us to see the beauty in life because often our purpose exposes life's blemishes.

Nonetheless, this harmony allows you to be present. And I believe being present gives us mental toughness. Let’s revert back to my running story:

Back in 2003, Diddy ran the New York City Marathon with only 8 weeks of training compared to the average runner’s several months of training. In typical Diddy fashion, he announced it to the world and created an entire movement around it, titled ''Diddy Runs the City''.

In this example, Diddy perfectly demonstrates the importance of being in sync internally and externally. He ran the marathon to raise money for the city's children and public schools, in which he successfully raised $2 million.

But purpose and media attention wasn’t enough to see him through 26 miles. Halfway through the race, his lack of proper conditioning exposed him, and to add insult to injury he re-aggravated his already injured knee and began cramping.

Nevertheless, upon reaching Harlem around mile 18, crowds of children began to run alongside him and onlookers held up signs cheering him on. After the race, he said that the children running with him kept him motivated to finish, reminding him why he was running in the first place.

‍"The kids wouldn't let me stop," Diddy said. "I was running for them, and they wouldn't let me stop.” Harlem was Diddy’s “wonders of the world”. Immersed in his old neighborhood,  an environment full of love and supporters was just enough to forget about the knew injury and cramping.

So, I would encourage you all to take a step back whenever you're faced with an adverse situation; ask yourself how can I be present in this moment? Because our ability to be present will determine the outcome of that situation and ultimately the quality of your life.